A is for Alice

Posted on April 1, 2020 by aliceinbloggingland

I turned 60 last year, 10 months ago in fact, to the day in fact, but I am still in shock.  Zooming more often makes me see that I have the face of an older version of the Alice I think I still am, but who is really, long gone, at least facewise.  I still think I have a young face with these odd aged parts to it—and Zoom is making me notice my neck, which is scary.  But I don’t feel down on myself.  I look fine for 60.  I just can’t believe I feel as young and anxious and excited and perplexed by the world as I always have.  I feel old in my poor old knees but not in the me-ness of me, my soul I suppose you could call it.

A few months ago, I saw that someone I had once been close to had died.  I saw this on Facebook, of course.  We had only been friends for about a year, and our main activity was getting high together.  I was in ninth grade, she was in tenth, and she was a very sweet but rather messed up person at the time.  I pulled back from my druggie ways the next year while she dropped out of school and went to court and did those kinds of things, but I always remembered her as a sweet, loving person.  So I was sad to see that she died, at only 61, and I got curious and went back to my diary from 1973 when we were friends.  This was the second year of my years-long consecutive-year diary-keeping (I started calling them journals in college, but they were definitely diaries in high school), and it was one of those Page-a-Day ones with a lock and a key, lost long ago.  Anyway, the little locking strap had broken because of all the scraps of paper I shoved in there, mostly drawings of my pants.  I began the pants inventory on the back pages, but because girls had only recently been allowed to wear pants to school (starting in 1970), pants were an exciting new area of fashion for all of us.  It was also the years of very low hip huggers and enormous bell bottoms.  So I drew pictures of all my pants, noting date of acquisition (new, second-hand, castoff) and color, and put them in my diary.  That’s what 13- and 14-year-olds do, duh.

Anyway, this friend, Mary, who I got high with as many days of the week as I could, died, and I wanted to read about our friendship.  My diary was not illuminating on that topic, however.  I catalogued every time I saw her, and the various boys I had crushes on (one guy looked like the picture of Romeo on my school copy of Romeo and Juliet that year), and a few other friends, and what we got high on (pot, hash, No Doz, but mostly pot).  And I found that the first time I mentioned Mary I called her the biggest slut at Woodbury, our junior high school.  Within a week I retracted this because I began getting high with Mary and our other friends and found that she was a very sweet person and all the people we hung out with had lots of pot.  Getting high every day became my goal and my priority.  It was a great escape from the tensions in my home.  But my diary did not say much more than “Mary is so nice,” or, “Mary finally got her period” (pregnancy scare), so I didn’t find anything illuminating about Mary.

I did find, to my delight, that the voice in this diary, which was orange with a silhouette of a knock-kneed girl walking on the beach, very eighth grade, was alive and immediate and immediately recognizable as me.  This felt profound.  I am the same person I was in eighth and ninth grade!  And I was funny as hell.  A sample, which was partly tongue in cheek, but not entirely:

“The establishment is getting me down (parents, teachers, cops).”

It was 1973, remember.  My favorite outfit was a tiny beige top that stopped above my navel with the glittery words Rock n’ Roll across the chest, which I thought camouflaged my lack of a bustline quite nicely, and a pair of very lowcut plush corduroy bell bottoms, bright magenta that picked up the purplish pink glitter on my shirt.  A full 3 ½ inches of flesh between my navel and the top of my pants showed, and I wore this outfit in dead winter in northern Ohio.  I mean, with a coat outside, but at school I felt the chill and I felt I looked amazing for once and I felt cute.

So of course, the establishment was getting me down.

Anyway, prompted by the death of someone I had not spoken to or seen in 45 years, I looked at my old diary, and it led me to other old diaries and journals.  I abandoned the Page-a-Day format on January 1, 1976, and began filling notebooks with page after page of profundities.  I thought I’d be bored, but I was not, not at all.  I thought, what a gift I have given myself, this record of my life.  And that voice!  I’d know it anywhere.  It is the me-est thing about me, my voice.  My uninhibited, unfiltered voice, there on the page.

I didn’t read these volumes in order.  I picked at random from the pile of 38 numbered volumes, which I filled with near daily entries for about 15 years, and at least weekly or biweekly entries for another 9 or 10.  Then I had a kid, so the writing slowed, but it did not stop.  And the voice of the writer writing about her new daughter’s warm damp body on her chest is the same as the voice of the angsty college student wondering if she has any talent, the same as the 17-year-old worrying that being an artist won’t save the world.

I had been in a bit of a funk about turning 60, but for a few weeks during winter break, I dipped into different parts of my life and the things I chose to record and somehow, being 60 became a lighter load.  Because there I was, on those pages, witty, hilarious, tortured, in love, in lust, drunk, sober, floundering, directed, but always the same person.  Alice.  The Aliceness of Alice.  Me. 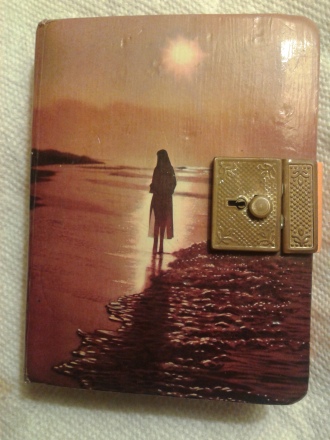 I am starting a blog in order to establish a regular writing habit, with readers. Enjoy!
View all posts by aliceinbloggingland →
This entry was posted in Adolescence, Being an artist, Childhood, creative nonfiction, Memoir, writing. Bookmark the permalink.

5 Responses to A is for Alice