A my name is

Posted on April 1, 2015 by aliceinbloggingland

Alice is old fashioned.  None of the girls in my school were named Alice, though we did have a family friend with an Alice, six years older than me.  Her sister was Emily, and my mother told me they had considered that name for me.  I was rather crestfallen when I heard this—Emily seemed like a prettier name, not as harsh as the sound of Alice, with its slicing S sound at the end.  Emily was more lilting and cozy.  For one day I insisted that I be called Emily, but I didn’t stick with it.  I decided I liked Alice after all.  Much of this credit must go to Lewis Carroll and his adventurous heroine.  Who can resist Alice in Wonderland?

As a little girl I was called Allie.  No one ever prescribed a spelling for this, and I received gifts from various relatives using a variety of spellings:  Aly, Ally, Ali.  I never picked a preferred spelling.  At a certain age, sometime in elementary school, I noticed I had become Alice.  Only a few family members called me Allie, and I missed the softness of the sound of my nickname, but let myself be Alice in school.  Occasionally people shorten my name to Al, but that has never felt like me.

When the movie Love Story came out, everyone loved Ali McGraw, and one of my friends started calling me her full name.  I looked nothing like the beautiful brunette actress, but it pleased me to be associated with her and her tragic role, the spunky cancer victim.  “Love means never having to say you’re sorry,” she insisted.  I wondered if that were true.

In college I made fast friends with another Alice, my first close peer to share my name.  We roomed together one year, and sharing a phone proved a bit confusing.

At 31 I moved to a new place to start graduate school, and decided to tell people to call me Allie.  One professor responded in a gently mocking tone that he’d had a cat named Alley, but he stuck with the name I asked for, a little to my surprise.  Apparently, when you ask people to call you something, they comply.  A few times, people asked how to spell it, and I said I didn’t care, which perplexed them, so I settled on A-L-L-I-E.  Same length and shape as Alice, though the extra letters seem a bit superfluous.  A-L-I seems dated and pretentious, and prone to mispronunciation à la Muhammed Ali, emphasis on the LI.  (Though I am fond of it, thinking back to the days of being Ali McGraw.)

So there is a dividing line:  people who met me before 1991 call me Alice, and those who met me after call me Allie.  My pre-1991 best friend cheerfully made the switch, and for a while it sounded odd having her call me Allie, not Alice, but since she is of the Allie era as well as the Alice, I have adjusted.  My husband met me as Allie, but he is a famous nicknamer and calls me Alice, Alison (which I had always hated, that is NOT my name, but from him it is an endearment), and many other silly names having nothing to do with my given name at all.

I prefer Allie (or Ali or Aly, the spelling a dear aunt would use on Christmas presents—I still don’t care much how it’s spelled).  Soft off the tongue, the name itself sounds like an endearment, softer than Alice.  Alice is a good, solid, professional name, a name to publish under.  Ali (spelled any old way) is closest to my private, relaxed self. 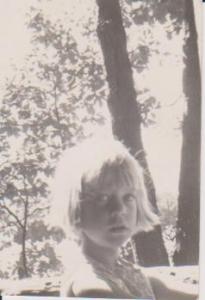 I am starting a blog in order to establish a regular writing habit, with readers. Enjoy!
View all posts by aliceinbloggingland →
This entry was posted in creative nonfiction, Uncategorized, writing. Bookmark the permalink.

6 Responses to A my name is