L is for Lena

Posted on April 14, 2014 by aliceinbloggingland 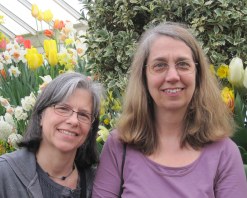 Her real name is Lenore, but in college a punk singer named Lene Lovich inspired us to redub her Lena. She was game, and it stuck. When she lived in Japan, Lena was easier to pronounce than Lenore, so it stuck there too, most notably with the Japanese man she married. So she became Lena to most people who met her after 1980.

It’s hard to describe a best friend. Talk about unconditional love. I am often high maintenance (which she would deny), yet there she is. We began calling each other Bitch, which is hilarious because there is nothing remotely bitchy about her (as for me…). Even when she’s grumpy she owns it and informs all who might be affected.

Clearly I give her something too. Bitchiness? Or a better sense of how to assert herself. Let’s call it that.

And we have a blast together, doing whatever. She’s so easy to be with. Most people who know her love her, and I am so lucky to be her bestie.

I named my firstborn after her. A very different soul. My Lenore/Lena was a fighter from hour one, fighting the nurses and her dad during her first bath. She’s 17 now, and opinionated. And adored, of course.

L is for love. The deep comfort of friendship, and the inexpressible depth of love for one’s child.

L is for luck.

I am starting a blog in order to establish a regular writing habit, with readers. Enjoy!
View all posts by aliceinbloggingland →
This entry was posted in creative nonfiction, Uncategorized, writing. Bookmark the permalink.

6 Responses to L is for Lena