Posted on April 3, 2014 by aliceinbloggingland

My dad died while I was walking the dog. Or maybe while I was driving back from the dog park. I was at the farthest end of the park when my brother called me and told me it was almost time. I was chatting with some other dog owners cheerfully, then told them I had to go, without telling them why. It was a sunny April day. Everyone was in a good mood.

I felt sort of floaty as I hustled back to the car, hurrying my dog along from her usual sniffing and dallying. Dad had lived in my house for the last two years, and I was going to miss his dying. But I figured it was okay. Dad loved dogs, and would be happy I had taken the time from his bedside to walk mine. It felt right, in some weird way.

My phone rang when I was almost home and I saw it was my sister calling from across the country. I told her it was time, that I was driving home, our other sister and brother with Dad.

I had never witnessed seeing someone die before. I searched inside for disappointment. But it didn’t matter.

My sister and brother were crying on their phones when I got home. I went right to Dad, vaguely aware of the home health aide hovering in the background. He was gray. I’d heard that the pink goes out of dying people very quickly. I wailed “Oh Dad!” and kissed his forehead.

I helped him have a good death. Three people were with him as he died. And when they told me later how it was, I was a little glad I missed it. My sister and the aide were talking and laughing about my dad’s love for scrapple. I’m pretty sure I would have found this irritating.

I’m not a huge meant-to-be person, but I think this end was exactly right. I wasn’t there imposing my need for a certain kind of end. People who loved my dad were with him, laughing about his favorite breakfast. I was walking my dog.

Our rocky relationship had ended well. He had been hesitant to move into my house, but my siblings and I convinced him that he’d be independent. He lived in a separate apartment with its own kitchen and bathroom. Aides came for a few hours a day at first, more once he stopped walking. I preferred it to having to drive to assisted living and dealing with all the layers of bureaucracy there. Having him in my home meant I could be with him and my own family with ease. And it helped us keep learning to be kinder to each other—that lesson had begun years before, but my mother’s death and his own dying accelerated the process.

Once, a few months before he died, I thought I should try to spend more time with him. I brought him his mail and sat by his bed to chat, with no particular subject in mind. He started talking about his in-laws, my grandparents and my uncle, and griping the same old gripes I had heard for years. OK, I decided. I already spend enough time with him.

But he didn’t always gripe. He perked up when we talked baseball, and when my sister and her husband and sons talked to him on scientific subjects that were beyond my grasp. And he was always interested in what my kids were doing, and my dog.

I have written about this before, but it sums up my father so well. A week before he died, as the forsythia and daffodils were flowering, he wanted to know if the chemical compound that made yellow in daffodils was the same as the one that made yellow in forsythia. I sent the question along to his old colleague. Then Dad began dying in earnest and the question was dropped.

I still don’t know the answer. But I love the question itself, and the curious mind behind it, in its last days, still constructing the world through the eyes of a chemist. 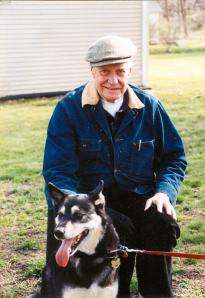 I am starting a blog in order to establish a regular writing habit, with readers. Enjoy!
View all posts by aliceinbloggingland →
This entry was posted in creative nonfiction, writing. Bookmark the permalink.